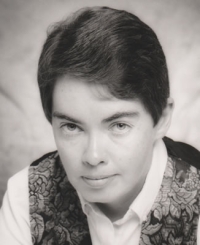 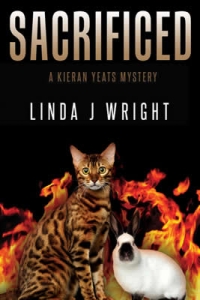 Born in Ontario, she grew up in a military family, and spent part of her childhood in France. She studied English and Philosophy at Carleton University in Ottawa and at the University of Toronto. After a brief stint as a high school English teacher, she worked at the University of Toronto as an editor.  But writing was always her first love, and she left U of T and moved to Victoria, British Columbia, and then to the United States, in pursuit of her dream of writing fiction. Along the way, she published dozens of short stories, several of which won awards including the Writers of the Future Award, and the Aeon Award: both for speculative fiction.

In the nineties, she received three California Arts Council Artist-in-Residence grants to teach short story writing to GATE students and won a California Association of Teachers of English Excellence Award for those classes. Writing as Lauren Wright Douglas, she won the Lambda Literary Award for Best Mystery in 1992 for the second book in her detective series. Publishers Weekly found that novel to be “enjoyable and thought-provoking”, and the detective to be “irresistible: smart, independent, sexy, funny, and entirely human.” However, that detective series is now woefully out of date and of print. The Kieran Yeats series – Linda’s new series – is set in the modern digital world (no one has to look for a pay phone!) and focuses on animal rights issues. Stolen is the first book in that series, and is Linda’s eleventh published novel.

An animal advocate, and sometime activist, Linda has been involved in animal welfare for nearly 30 years. In 1990, she founded the rescue organization The Cat People, and served as its first President. Since then, she has served on the Boards of several animal welfare organizations and has been a consultant to dozens of animal rescue/welfare groups. In 1999 she was part of the team that rescued Keiko the orca (the real Free Willy) and rehabilitated him in Newport, Oregon, setting him free off Iceland. She continues to advocate for animals through her writing.

Linda J Wright now lives in Oregon, where she shares her life with her partner and their spoiled rotten cat.